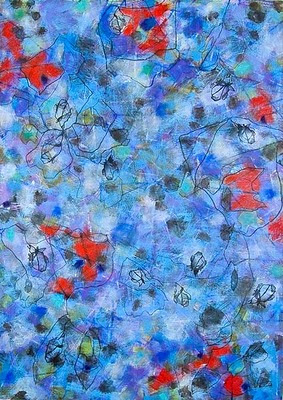 I thought I would write about talent and got to thinking about artistic vision. The question that arose for me was about distinguishing between a “gift” and “skill” and then on to art itself. What brings forth the masterwork (or lesser work)? Herewith the ruminations:

Vincent Van Gogh’s skills (or lack thereof) were honed by practice, seeing the work of others, and dogged determination. He started with little ability to draw as evidenced by his first clumsy drawings. Well aware of this weakness he applied himself, learned to draw and went on to work at becoming adept at painting. Still, if I select from memory an artist who was (or is) a good draftsman, Vincent would not appear among the options.

So what did he have? Talent or gift that was born with him? Not by my lights. I would say it was single-mindedness and vision. Even the vision took some time to form. He learned to paint by practice, from seeing the work of others that impressed him (mostly the impressionists and Paul Gauguin), and then somehow he bloomed into the expressionist we know and love. He was unlike those who influenced him. Since his entire painting career spanned only ten years I imagine that he must have worked very hard.

Consider the story of Morris Louis, whose early paintings were not exceptional. He was persuaded to see the work of Jackson Pollack and Helen Frankenthaler and he proceeded to emulate both, closely. His work became wholly abstract and he changed his painting technique. Like Pollock he poured paint onto canvas but to completely different effect. And then he morphed into Morris Louis, extraordinary color field painter, very different from either Frankenthaler or Pollock. What did he take from them? My guess is that it was their courage, which they both had in good supply, and which I believe is an essential component in any kind of creative venture.

So you might think that I don’t believe in talent, but no, I do. It’s just that it’s a part of the equation and not necessarily the critical component. I chose to study Fine Art  (as opposed to Graphic Art, the other option) with a group of people who were examined and accepted by the school on the basis of their potential. Which meant their willingness to learn and to develop that gift or talent or whatever you want to name it. Some were filtered out, many changed course after graduation for a variety of reasons but mostly about making a living. A few persevered, some of whom prospered, others didn’t.

Drive and vision + gift = art? And we haven’t mentioned having a place to work and food in the frig.

The image above is Promise acrylic & mixed on etching paper, 50 x 36", 2009. For information about any of the paintings seen on this site please email Joan.
Posted by Joan Gold at 11:19 AM