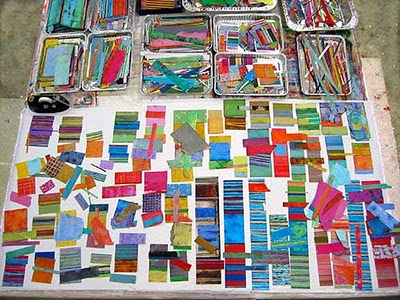 Painter Mary Cassatt said: "I am independent! I can live alone and I love to work.” While I am sure there are some exceptions, visual artists and writers work best in solitude. I had the glorious experience some years ago of spending a month at Yaddo, the artists’ retreat in upstate New York. The painters and sculptors in the group were given large, well lighted studio spaces and separate lodging. The writers had a bedroom and some kind of office to work in. Our phone calls were filtered, only emergencies allowed through; otherwise messages were relayed when we came to dinner. Lunch was left on the doorstep of our workplaces without so much as a knock on the door. Lively conversation at dinner was the reward after a silent day. Yup, it was glorious.

When I first started painting full time I turned off the phone during the day and made abundantly clear to friends and family that daytime visits were discouraged. I have since learned to keep the phone on and unless the call brings disturbing news, I can slip back to work with ease. I love solitude. And I love silence. I rarely turn on the radio when I am in the studio. I become so submerged in the work that the phone or doorbell will cause an unpleasant jolt. But removing the possibility of that connection to the world changes the solitude to loneliness.

Writer Alan Watts said: “I owe my solitude to other people.” I don’t know if he was talking about being friendless or if it was gratitude to those who did not intrude. Anthony Burgess was clear: "To be left alone is the most precious thing one can ask of the modern world." It takes all kinds.

The image above is a partial view of my worktable as it looks now. I am assembling small collage paintings for the upcoming open studio event in Humboldt County. They are also destined for the new website I plan to have up and running this summer. To be announced.
Posted by Joan Gold at 10:42 AM