About the Bliss of Art 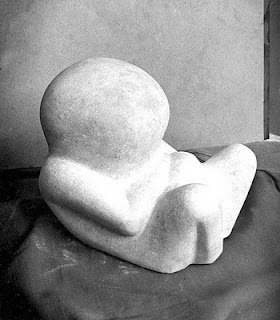 When I was seventeen years old in my first sculpture class, in ignorance and arrogance I chose to work on a chunk of marble. I had not the vaguest notion of working in three dimensions and even less of chiseling stone. Fortunately our instructor was intrigued with my project and guided me through it. I saw a baby in the shape of the stone and planned to make it visible. It was to be a fetus in spite of teacher and student friends considering that an ugly, unsuitable subject for my sparkly, beautiful block of marble. Life magazine had recently published the first photos (this was 1951) taken of a baby before birth and I was smitten.

What followed was my first experience of the bliss of being totally absorbed by a creative venture. I ate, drank and slept that baby. I stayed after school, got in early, spent my lunch hours in sculpture lab. It was hard not to be there. It took the entire school year and was a great success; how could it not be when it was born of such devotion? I got an A+, lots of applause and the piece was chosen for the annual school show — where it was stolen, the first robbery of its kind since the school opened in 1859.

I was proud of that. I would have been devastated if it had been taken before I finished with it, but it was over and done and well photographed. I missed the sweetness of the project but I was blessed to know it again and again later in life, though never with quite the same intensity. My only grief is not knowing who took it. All these many years later, I still want to know.

"A longing for excitement can be satisfied without external means, within oneself; for creating is the most intense excitement one can come to know"
Anni Albers
Posted by Joan Gold at 9:55 AM