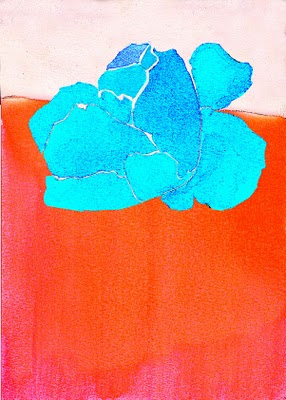 The tradition of artists making prints: etchings, woodcuts, lithographs, silk-screen and such, reaches  far back into art history and up to the twenty-first century.  Goya’s Caprichos, made in the eighteenth century, are aquatints, a process in use from about 1650. Albrecht Durer was an engraver in the fifteenth century. We also have drypoint, mezzotint and monotypes. And now we have the phenomenal advent of print by inkjet. I have a vested interest in promoting this process as, I might have mentioned before, I am hooked on it. But I have seen that it does not yet get the respect that I would like it to inspire.
Today I will describe the process which produced the image above, an original print. Original because it exists (as do some of the other giclées I have exhibited here) only as a print. It is a lengthy, meticulous and expensive (the archival inks) operation which I revel in. So, in a rather large nutshell, I started with three of the Memory series that I described a blog or two ago. I took the flower shape from one; it was red in the original scan. The large red area came from another of these scanned old works, originally a flat opaque red on the top part of the scan. The pale pink area came from a finished piece in which I had achieved the desired degree of light. I made adjustments for contrast and scale, placement, saturation and color balance. The separate elements are arranged collage fashion, an operation for which Photoshop is well qualified. I have been working on this image for several days and will now start printing, making “proofs”, until I get the color and visible texture and interest as I want them.
I learned at school that editions were limited and each print numbered because the metal plate or wood block, or silk or whatever the print was made from deteriorated with use, making the first prints of finest quality. It seems that limiting prints done by the giclée or photographic method is about valuation or pricing. A case in point: Condé Nast is publishing a great  old photo from Vogue magazine for $2050, edition of ten. And this:  Recent auctions of giclee prints have fetched $10,800 for Annie Leibovitz, $9,600 for Chuck Close, and $22,800 for Wolfgang Tillmans.  April, 2004, Photographs, at Phillips de Pury & Company, New York. Limiting the editions in these cases keeps the price up and resale more profitable. My editions are limited because I want to go on to the next work when one has become all it can be. I print more on request but since even my collectors are interested in the next newer work, editions remain small. Numbering is an artificial embellishment; kind of silly, don’t you think? There is no deterioration of the giclée and the number printed is small by the very nature of the process.
I tried to keep this short, but got carried away again. Thanks for reading.
The image above is Red Blue Memory, 2010, giclée print, size varies. For information or to purchase any of the images on this site, please email Joan.
More information and an explanation of the term “giclée” can be found at: About Giclee Prints
Descriptions of the print processes mentioned above can be found at can be found at "P" | Subject Index | Heilbrunn Timeline of Art History | The Metropolitan Museum of Art
Posted by Joan Gold at 12:09 PM