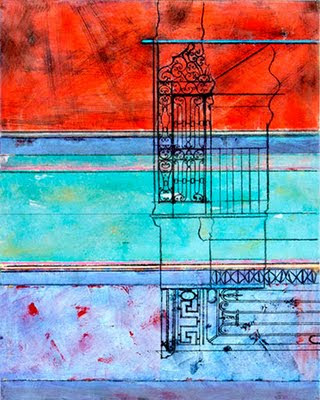 A recent Time cover article was about how optimism is an integral part of our human operation. Well, of course. How else would we sell lottery tickets, have reality shows or even plan a vacation? I need all the optimism I can muster to get myself on an airplane. The article went on to say that we do a far better job of imagining our sunny future than we do at remembering our real history.
All my life I have had vivid fantasies about how I wanted the story of my life to proceed. When I was very young the next chapters were essentially romantic and adventurous. Later they became more about life becoming easy and comfortable although the romance and desire for excitement didn’t completely abate. And then, in my mid forties, I opted to live the vision entirely and put rationality aside to dedicate myself wholly to painting.
As I recount in my recent video interview (available for viewing here), if I had known what lay ahead for me I would have been far more scared than I was. I know now that it was that crazy optimism that resides within the frontal cortex of my brain that made the decision doable. But certainly not less crazy. As Warren Buffet said: “Risk comes from not knowing what you're doing.” In my case, no knowing was a blessing. Now, many years later, I marvel at how good it has been. I have been fortunate in my art-business dealings and have benefited greatly from the support, moral and practical, from family and friends.
According to the research the outcomes of the choices you make and the tests you take are more likely to be positive if you expect them to be so. It is not so easy to imagine a bright future as the years accumulate. The time ahead does not stretch endlessly as it did before. The realities of old age keep breaking through as the script is written. But how about these apples: Claude Monet didn’t even start his water lily series until he was in his seventies; Goethe finished Faust in his eighties; Pablo Casals was still performing in his nineties? (Thanks to Peter Spellman, Berklee College of Music) Looks like there’s reason to be hopeful, doesn’t it?
Writer Anais Nin said: And the day came when the risk to remain tight in a bud was more painful than the risk it took to blossom.
The image above is from the August Quintet, ©2011. An archival print of it will be available this weekend for the second round of our North Coast Open Studios. For directions or inquiries please click here to email me.
Posted by Joan Gold at 11:57 AM