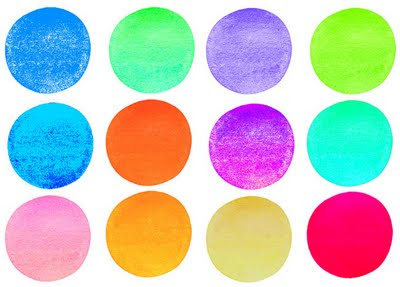 The image above is of some of the color samples I use in the studio to help me stay on track. And below is photo of a studio wall today. The quartet in the center of the wall is the major focus. Surrounding it are exercises to play with when the mood strikes. As I move on with the monochromatic paintings, I remember my first painting teacher. It was my second year at Cooper Union and I was eighteen years old. In our first year we did a lot of design: two dimensional, three dimensional and architectural, along with life drawing, sculpture, calligraphy, drawing, aesthetics and history of art. A fairly traditional line-up during the time that we were emulating and revering the abstract expressionists of the fifties. The instructor was John Ferren, a romantic figure just back from a long time in Europe. He had hobnobbed with Picasso, Miro, Kandinsky and Mondrian amongst other stars. We knew nothing of this history; he was our teacher.

He gave us a series of assignments that I am still working on half a century later. After allowing us to get used to the feel of painting in a shared studio environment and instructing those of us new to oil paints (we had used tempera and gouache in first year) he asked us to do a series of paintings, each one based on a primary color: a blue, a red and a yellow. We could push these colors to their limits of variation but no other color was allowed on our canvases. My attachment to the man began one day when totally frustrated with trying to make my red painting sing as I wanted it to, I took a bit of green paper and stuck it into the wet oil painting. Ferren spied this insurgence from the other side of the great studio room and sped towards me ready pour out his wrath. When he saw my prank he said: “Very funny, Gold, take it off.”  Our friendship was cemented one day when a large canvas I was engrossed in toppled from its easel onto my head. John Ferren gave me a turpentine shampoo along with advice about keeping my wits about me even when I painted. It was he who wrote the recommendation that was a strong part of the fellowship application that sent me to Latin America and set me on the course my life would take. 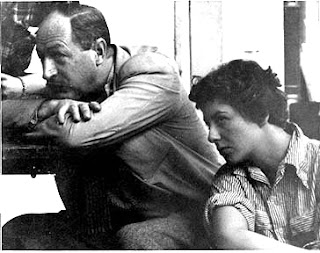 That's us, ever so long ago. I still think of him with great affection; he is one of those people that I would like to meet again and share a bottle of wine with. I would tell him about how that long ago assignment so intrigued me because I never got it quite right. This time I will put a bit of green into my red painting. I don’t have to follow the rules any more. And from what I read about him now, he never did.
Posted by Joan Gold at 11:58 AM