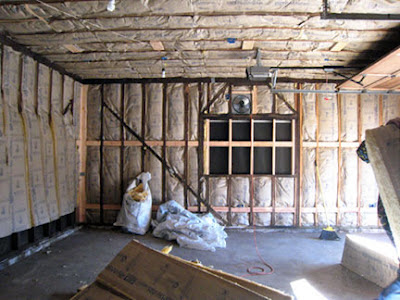 I’ve been getting organized. Since moving a little more than a month ago, that has been my priority. The plan is to get the house in order: functional, comfortable and presentable. Then I can go to my new studio and know that when my workday ends, I’ll have that place to take refuge in.
In this time before the studio renovation is completed, I plan also to get some new prints made for the June’s open studio event. I hope too, to work on daughter Barbara’s wedding photo album, a long overdue project which has great appeal.
So I think: I’ll get up at an early hour, do the usual morning (coffee, newspaper, exercise video every other day, check email) and then get to the tasks that await. There are no boxes left to unpack but there’s some fine tuning to do. The room that I have made into my office (obviously intended to be the living room of this little house) needs for my desk to become uncluttered and my worktable to become work-friendly. The computer and peripherals are on a third table already perfectly set up thanks to my youngest daughter who is fast and efficient. (We’ve been calling her the “Energizer Bunny” since the move.) The room that I have designated as my “sitting room” is one of the two bedrooms. It is waiting to be outfitted with something to sit on. That will happen in a few weeks and has been a delightful project. The closets need some ordering which shouldn’t be too hard now that I have rid myself of lots of excess in worldly goods. Then on to the prints and the album.
Ah, but as often happens to well-laid plans, disruption ensues. It takes the form of an invitation I might regret to refuse - to dinner prepared by the daughters who have become the cake and pizza queens, or to join them and friends for drinks, or some other temptation to leave work undone. Daytime interruptions are about dentist, haircut, medical check-up, grocery shopping, maybe something from the hardware store. Woe is me. Life gets in the way of my intended orderly and productive operation.
For those who think it admirable that I honor my commitment to write this blog every week, I say this: while I rarely want to get started, once I do, it is a very pleasurable job. After all, I’m talking about myself, about my life.
Writer Daphne du Maurier said it in few words: “All autobiography is self-indulgent.”
The  mess in the photo above is the present state of my studio-in-progress. All the windows but one have been covered as I need the walls to work on. I use daylight fluorescents for lighting and prefer them to natural light for their consistency and reliability. The exhaust fan is about my occasional use of sprays for pastel which can be a threat to the brain. Don’t need any of that.
Posted by Joan Gold at 11:49 AM