About an Honest Day's Work 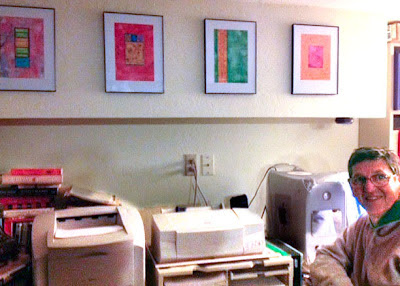 I am so glad to be back at work. I wonder sometimes about retirement. Most of the people in my world who consider themselves retired go on being productive in some way. Some were not happy to stop doing the work they were paid for. With unemployment rampant as it is now I suppose some room needs to be made for the youngsters entering the work-force. Otherwise I can see no reason to force retirement on experienced and effective elders.

The way I see it, most people like to do something with their time. After all, how much leisure does anybody really want? Well, maybe there are those that can be content to loll about on beaches or in chairs with books for the rest of their days. But they are certainly not the majority. A well-earned rest after digging in the yard or producing marvels in the kitchen or studio seems to me far more appealing than days of swinging in the hammock. Though some hours of that here and there might be nice.

Once, long ago, when my aging father visited us in Caracas, I tried to persuade him to stay. I took him to see my doctor when he had some health problem and later spoke of him with that same MD. When I mentioned my plan to keep Pop with us he asked: “And what would he do?” Good question. My father was a worker. He had been a policeman and always had a well equipped wood shop in our basement where he could be found when not on duty. (He later lost an eye in a saw-table accident and was retired as a cop.) He was never content to be idle and took pride in his craft. So I stopped nagging at him about remaining with us. At the time he lived with my younger brother and kept busy doing some cooking and grocery shopping and housekeeping. That was a life superior to what he could have with us.

I have an image in mind of old people working in the rice paddies of Asia. There are paintings of elderly gleaners from times when retirement was not an option. You worked until you croaked or could do no more. And then the family either fed you or put you on an ice floe. Or something. No retirement communities or homes for the aged.

The photo above is my retired friend Mike Yanke (my prints on the wall behind him) who wears himself to a frazzle making more beautiful an already beautiful property in a wooded area a bit north of my home. And as you might discern from the photo, he keeps busy indoors too. His retired wife is an accomplished glass artist often engaged at a kiln.

From anthropologist Margaret Mead: “Sooner or later I'm going to die, but I'm not going to retire.” And here’s athlete Bill Copeland: “Before deciding to retire, stay home for a week and watch the daytime TV shows.”