About Dots and Stripes

The world turns in its crazy loop and I am thinking of dots and stripes.

I have painted dots and stripes many times in the past but this is new. The paintings pictured above, Hydrangea and Nocturne, are from the nineties. I am inspired now by the sets designed by ceramicist Jun Kaneko for  Madame Butterrfly. He uses stark whites and unrelenting blacks and clean color to dress the performers. So I am making black grounds and white grounds for my dots and stripes, and panels of from-the-spectrum hues for the color panels. The stripes I make now are softer and the effect less structured than before. As the painter changes, so does the painting. 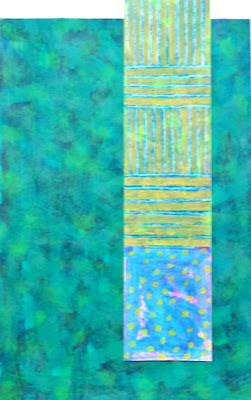 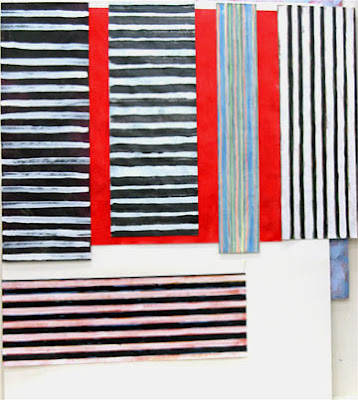 The whites are not difficult. So far. But the blacks are a true challenge. I can get them right on the larger panels by layering and reworking until they glow. But black stripes on white tend to die. The stripes just lie there like corpses. So I go back into them with greys and overlay with transparent glazes and sometimes get some help from an intensely black pencil. It’s working but I thought it would be easier. The nice thing though, is when it’s finished, the labor is not apparent. You don’t want your viewers to suffer the travails but rather to enjoy the part where you finally get it right. If that happens.

Right now I have faith. The beginnings, as documented below in the first tentative joining of some panels, look good to me. This process, of first painting on paper and then composing the panels into groups and mounting them on canvas, leaves a lot of room for mind-changing. It is a system of trial with much error that works well for me. Nothing gets committed until it passes muster. So mistakes happen but are whisked away unwitnessed except by the perp. I wonder sometimes just how interested my readers are in this painting soap opera. I also wonder how it can obsess me as it does while the world warms and massacres happen. Or maybe it is because of that.

Below are the costume designs by Kaneko: 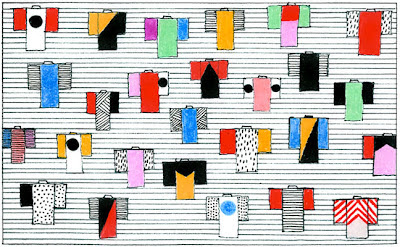