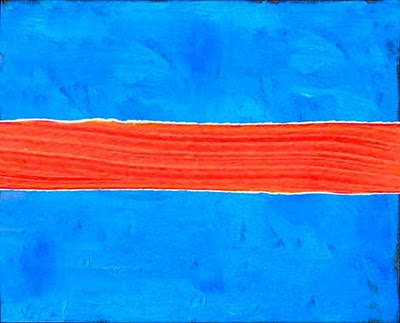 Some years ago, while in San Francisco, I was taken to visit a young man who worked for Apple. He was testing a color monitor long before these models were ready to market. To show me what was in our future, he called up a bright cerulean blue screen and drew a wide swathe of cadmium red light across it horizontally. I was enthralled. That was the kind of light I wanted in my paintings.

Now, many years later, I get to use this tool as I work. My printer cannot produce anything that rivals the luminosity before me on the screen, but the impulse to produce it is usually behind the work.

From The London Evening Standard: “Tate Britain has announced its first iPad art installation."
"It is believed to be the first time the Apple touchscreen computers have been used in a major gallery installation.
The move follows the work done by artists such as David Hockney, who has created a series of artworks using his iPad.”

There we have the computer as canvas. I imagine that Da Vinci would have liked these apples.

The image above is not a painting nor does it exist in any form other than a file on my computer (and now on yours). It will never look as good on any other surface.
Posted by Joan Gold at 7:50 AM