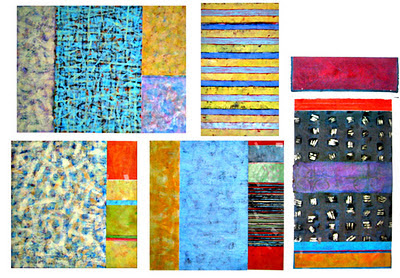 I marvel at how if you set a group of people to draw or even photograph an object, everybody’s results would be different. But what is more interesting and often hard to believe is how two people separated by great distances and sometimes language also, having no contact with each other, come up with the same invention or discovery at about the same time.

A few days ago, as I followed a link to a blog I saw photos of an installation that could only have been produced by my friend Lori Goodman. But wouldn’t I have known if she was exhibiting in a museum in Massachusetts? Sure, I would. I wasn’t informed because these little hanging pods were by a different Lorrie (Lorrie Fredette). And while they looked very similar to me, the mediums were different. Lori works with paper and Lorrie uses brass, cotton and an encaustic medium. Isn’t creativity about our individuality? As it turns out, they knew nothing of each other.

I had a similar experience some years ago. I was walking in Houston and saw my painting in the window of a bank. I was startled, drew close and saw that it was not mine. But could’ve been. “Curiouser and curiouser!” said Alice.

I suppose this phenomenon is simply about the fact that we are now more than ever exposed to similar influences. We see the same movies and hear the same music the world over. Books are translated into almost every language. And in our separate fields we learn from those who came before us. How else would you explain the multiple simultaneous discoveries in science? Nobel laureates who have independently made the same discovery. The minds of great thinkers are primed with the results of previous efforts.

There used to be a great distinction in the arts from country to country, even regions within a country. There was the voice of southern writers in this country. A Japanese cellist playing Bach or a Bulgarian jazz pianist still surprise me. I suppose something is lost just as something is gained as we homogenize more and more.

The variety of influences on food have certainly made restaurant eating far more adventurous than it was in my father’s time. When I was growing up in Brooklyn, we chose from Chinese, Italian or seafood. We did have a great place for pizza right across the street from our house so no complaints. When I remember that pizza I always recall the day that I entered my brother’s room to wake him for school and almost fell over backwards. He had eaten a garlic pizza (raw garlic) the night before and the fumes were thick.

I will never understand how anyone can ever be bored. It’s a very interesting world.

The image above is of a wall in my office. Those are some of the painted “pieces” I am using now in a new collage operation.

Below is a table in my studio with small collage elements taking shape.