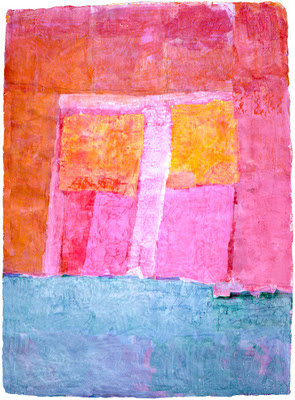 I was twenty years old when I left the US for Venezuela and forty-five when I came back with my four teenage children. I left good friends behind here and went on to make deep and lasting friendships there.
The newer friends were mostly the people I worked with at the university, two single men and the rest of us women married to non-American men. We all had friends outside this group but this one was essential; we spent time together at work and away from it. The two women I became closest to were, one a Brit, the other Venezuelan. Before I left Caracas, Pat left with her husband to eventually settle in the Basque country where Juan had roots. Carmen died a short while later from a brain tumor.
After I settled back in I was able to see two of my original old school friends a little more often even though they lived on the other side of the country. Then Susan was lost to lung cancer. I painted what I called “Little Houses” then and at times of grief afterwards. They were safe places for me when my mother left me behind in kindergarten and now I painted them for my friends. I painted prettily colored tombs for them. No need for places of the hereafter to be dark and grey and cheerless.
One by one my ex-patriot friends drifted back to this country. I don’t think many of us had intended to come back. It just happened. And a good thing it was since Venezuela does not now offer the good life it did (at least for its middle class and above; poverty was and is rampant). We keep in touch, some of us better at it than others, and have since met a number of times to have sweet reunions.
My homecoming plan was to devote myself obsessively, passionately and solely to painting. No time, thank you very much, for socializing. This piece of life I would do on my own. Friendships take time and energy that I couldn’t spare any more. I dedicated myself to making a solitary and productive life. In the meantime my kids became adults (miracles happen) and they became my friends, my support and good company. And after a while I let myself be lured out of my studio. Loneliness won out. Without making any special effort, the friendships happened. I wasn’t aware of how real and strong they were until recently when I started talking about moving. So many sincere offers of help. People willing to give me the time and energy and whatever else they could to ease the transition. I have been grateful for a lot of the gifts that have come my way. This one is huge. How could I ever have imagined that I could survive without friends?
Albert Schweitzer: In everyone's life, at some time, our inner fire goes out. It is then burst into flame by an encounter with another human being. We should all be thankful for those people who rekindle the inner spirit.
The image above is Cloister, ©1985, acrylic on handmade paper, 30” x 22”. It is one of the first little house tombs.
Posted by Joan Gold at 11:35 AM