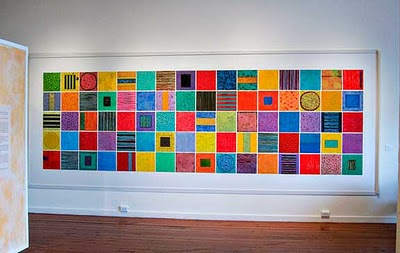 I have taken time off, away from my usual and beloved routine, to spend with family and friends during these holidays. It is not easy for me to do that as I love to work and feel safest when I am taking care of the business of life. My parents each had small shops in Brooklyn at a time when it was against the law to open a business on Sundays. The cop on the beat would turn the doorknob on the front door to make sure you weren’t trying to fool anybody and doing business on this day of rest. My father locked his door and worked in the back part of his cabinet shop. My mother would try to get him out to a movie and sometimes succeeded. I understand my father’s need to work. It feels like the right thing to be doing most of the time.
The biggest painting I have done is named Time Off (see also About Scale) because I did it for fun in intermittent bursts between what I considered more serious pursuits. The other projects that were in progress were well thought out and I had plans for them. Time Off was about putting colors together to please myself with no thought about any kind of outcome; I thought I would play with it and then take it apart. I put twelve inch squares of color painted on paper into groups on a twenty foot wall in my studio. I started with one group of five rows, four panels in each and went on to make three groups of that format. At that point I thought I might mount each of these groups separately as I did later with Structures and some others in 2008. But then I filled in the gaps and it became one painting. After that came a big job. I had to think of it differently. It was one thing to compose groups of sixteen or twenty pieces and keep each color panel close to those others that most enhanced it, and at the same time have the color distributed through the entire piece in a way that made some visual sense. I had never attempted to do that on such scale as had come together here. It could look like total chaos, which is not my inclination ever, or it could be harmonious and serene and coherent.
While that took a lot of time it never became tedious or laborious. It was always time off for me and a joy to work on from inception to completion. If I ever were to win a to week of all paid vacation on a beach in a tropical paradise I would give it away. I would rather have time off at work or with my family any place on this earth.
I use Time Off (with me in it for scale) at my web site. The image above was taken at the show I had with The University of California, Humboldt Division, two years ago. The details are ©2002, Mixed Media Collage on Canvas, image 62” x 198” on canvas 84” x 255” .
Posted by Joan Gold at 9:03 AM