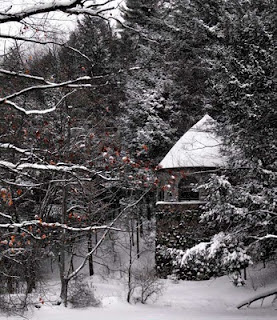 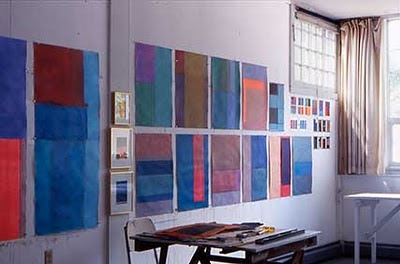 Some years ago I had the great good fortune of a month’s residency at Yaddo, the artists’ retreat in Upstate New York. The memory is with me now as I finally finish, after twenty years, work that was begun there. The process was interrupted when I left Yaddo and did some museum-ing and family visiting. The vision I was working with was lost. It took this long to feel ready to go back to these paintings and feel confident that I would be able to finish what I started without turning them into something entirely different.
I did take the largest of those works to a very satisfying resolution a couple of years ago — but it became who I am now with no respect for the vision that originally gave rise it.  And that was okay because it wasn’t really very far along and not much was lost. As a matter of fact, it had gotten itself painted into a corner and I was happy to make it into something totally different.
The other, somewhat smaller works, were a different story. They were pretty close to being what they could be and at the same time some distance from complete. I needed to respect what I had there because I liked them so much. What I had to deal with was that in the intervening years I had learned and changed. But I guess there is something within us that in spite of growth and learning remains a constant, solid core. I wanted to respect what they were and bring them to their full promise. I have now given them my all and they are complete. I will wait a few days and then hang them in my studio and look them over. I am a harsh and demanding critic and I usually ask of myself something more than I am capable of. But I will be gentle with these works as they are from somebody I used to be and I am kind of attached to her.
The image at the top of this post is the Yaddo studio where composer Aaron Copland worked during his residency. The image below is of the studio I was in during my stay with some beginnings on the wall.
Posted by Joan Gold at 10:35 AM