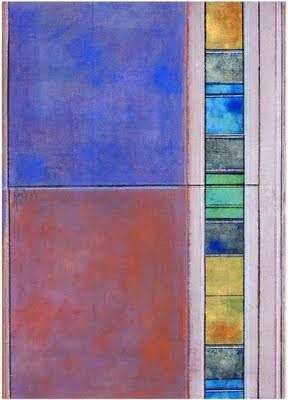 I have posted a new video interview which you can see by clicking on the photo to your right (if you are at my blog site) or right here if you are reading an emailed version of this post.
This interview is more personal than the first (also on my blog page, lower down on the right) and there is more biography. I was hesitant about making it public as it seems that the more one allows oneself to be visible, the more vulnerable one becomes. The feeling is not much different from making paintings available for public scrutiny. And what, I ask myself is this reluctance to be visible about? What is the risk? My brain answers loudly: judgement! And so what? I have committed no crime. Wherein lies  the peril in facing the opinion of others? Are we made of such fragile stuff that criticism can cause us damage? Can it distort or disturb the perception we have formed of ourselves? It certainly could that to me when I was a teenager.
I fell in love when I was seventeen years old and was dating the object of my affections. After a few dates and seeing each other every day during breaks at school, he ended our short lived relationship. He told me he was bored because I barely spoke to him. Well, not only was I devastated, heartbroken and mega-miserable, but I took his comments to be an accurate description of who I was. I had not yet grown into myself; I did not understand that I was painfully shy and new to romantic adventure. God help me, I was boring! It took a while to heal from that blow. Coming to terms with who I am has taken a lifetime.
I have also taken rejection as a painter. Early on in my career some paintings I had consigned to a gallery in San Diego were returned to me with a note: “No luck with these, please send new work”. I could not find the strength to send anything to them or anybody else for a while after that. I have a history of sending images to galleries and being ignored or receiving a “no thanks” letter. Success isn’t easy either. After a couple of sell-out shows, a gallery director told me that there was a waiting list for the paintings that I had not even imagined yet. That caused immediate paralysis that required therapy to remedy. And after all these years the vulnerability remains and I still don’t really know what the fear is about.
I have said here before that I relish praise for my work. I see artists as performers of sorts in need of audience approval. Some form of applause is desired. Several artists I know have tougher skins. They can plough on in spite of being spurned repeatedly. Maybe they’re just faking it. A few blessed souls can work in total isolation. I envy them.
The image above is one of the new mixed media paintings in the Structures series: Chroma-2, ©1989-2011, 26” x 20”
Posted by Joan Gold at 10:40 AM