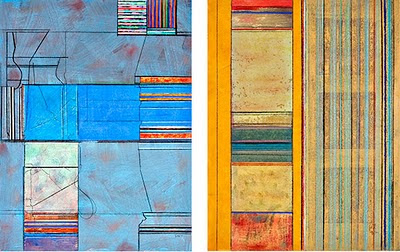 I mentioned last week that I am taking part in a series in which six artists show slides and talk about their work. Next week I will be the last of them. What has impressed me most about these presentations is how different we are.
When I was at school, during a class called “History of Aesthetics”, I asked how we could be shown examples of a work from an era in history as representative of its time. Isn’t there a great variety in the look of work by different artists who live at the same time in the same place? Well, no, was the answer. There are many more similarities than differences. The art historian can identify the time and place that a sculpture or painting was produced.
I had a very dear Venezuelan friend during the years I lived in her country. We were contemporaries and we loved each other and we held in common most of the values of the western world of our time. But there were some disparities.  She was born and raised in the Andes and partly schooled in Switzerland. Her family was well off. I grew up in Brooklyn, daughter of a cop and a bookkeeper. She was used to a home kept in order by several live-in maids. I employed maids while I lived in Maracaibo and Caracas but was always uncomfortable with being part of the system that I considered inequitable. I suffered guilt for it but was glad to be able to have a job while my children were small. Carmen did not understand my discomfort. And I was amazed that she, who was one of the most decent and honest of women, would encourage her children and mine to copy from their neighbors when they didn’t know an answer on an exam. In Venezuela, cheating on tests was okay, getting caught was not. These disparities of value systems are minor compared to what they can be when you consider greater geographical distances and all the possible variations in cultures and histories.
But what about us? We are six more or less contemporaries; all born and raised in the same country, whose thinking and approach to art is totally different. Are we more alike than I can discern? Or is it that we live at a time when the influences on us come from many more sources? I will continue to puzzle over this until an answer appears or another question replaces it as my current obsession.
The image above is of two of the new mixed media pieces from the Exposure series, 26” x 20” each, on etching paper.
Posted by Joan Gold at 11:34 AM