About the March of Time 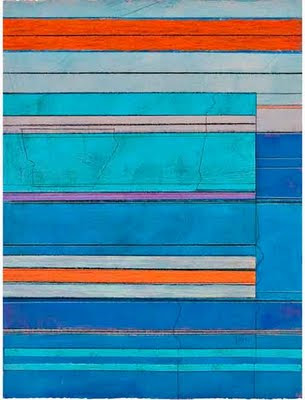 At the beginning of this year and for several months thereafter, I worked in my studio at assembling thirty-two collage paintings in a series I named “The Structures”. I described some of that process here and included some images. That took a few months and then for a few weeks I devoted myself to contacting those people who sell my work and attempted to add to that list. I had to put the new work out in order to exchange it for the money I require to continue with this operation. I interrupted to get ready in a hurry to open my studio for two weekends and do my own selling. I hadn’t left enough time to do it all: the framing, printing, making the space visitor-friendly, taking down half-finished work to make room for the studio-expo, sending out announcements and such. Fortunately my unpaid help, daughter Laura, was on hand to do much of the labor at my side. And the event was, as usual, thoroughly enjoyable.
There was some more marketing after that and then one day I started fantasizing about painting. I kept myself lashed to the computer and imagined the different ways I could apply paint to a surface. I was contemplating a kind of intense color different from what I had done before. I made a deal with myself. I would do an hour or two at the computer every morning before going out to the studio, to update business stuff, still only about half done. I had photographed the new work, spiffed up the images, put all the new pieces into my database, and uploaded them onto my web site. I had titled and priced and written descriptions of everything. I need to say here that while this sounds like it might be a smooth-flowing operation, it is not. I am slow to make decisions; I type with two or three fingers and I am an idiot when it comes to numbers. So okay, it takes me a while but I do a fairly good job of it finally. Except there has been no finally. After failing to keep the bargain of those pre-studio morning hours, I made a different deal. Alrighty, then — paint for as many days as it takes for you to be ready to stop for a while, a week, two weeks, whatever it takes. But, by God, if you don’t get to the marketing, the sky is going to fall in.
So I have been painting. This is real painting, with a brush and paint, not assembling collage elements or preparing paper or canvas, or using other media to embellish the final surface or varnishing completed work. No, this is painting and it is satisfying and addictive. I’ve been at it for several weeks and it only gets better. At the beginning I was cold. I forget how paint works and how to get the effects I’m after when I’ve been away from it for a while. And now I wanted to bring another kind of vibrancy to it.
I unearthed some large old unfinished works on very heavy paper. I often put work aside because I see a potential that I don’t know how to make visible. When I looked these pieces over and I saw exactly what they needed and felt completely clear about how to make it happen, I laid out paint and went to work. And after a few days I was right on track, the work moving along almost effortlessly. I am so happy with it. I know what I am doing. There is so much to do that I want to do. There is so little time. The marketing will get done. I wonder who will do it.
Writer Isaac Asimov said “If the doctor told me I had six minutes to live, I’d type a little faster”.
The painting above is Partition, ©2011, acrylic & mixed media on etching paper, 26” x 16”. My 50% moving sale (still haven’t found a place) continues at Artful Home until the 28th. The image above was in their newsletter with this note from the CEO: